I have always been an animal person, everyone in my family is. From 2011 until 2017 I didn’t have any animals, nor did I live with anyone else’s pets. I didn’t really think about it much during that time, but once we moved to our farm and started getting animals it was clear to me that something had been missing.

Growing up we always had pets. My mother was a biology teacher and my father simply loved animals to the point where he couldn’t go to an animal shelter it upset him too much. In addition to pets, I also spent much of my time at horse stables up until I was about 11. When I moved out of the house one of the first things I did was get a dog. Probably not the wisest decision but when things got complicated my parents took her in and she really became their dog.

In 2010 after a break-up I was without animals again, then I moved to Jakarta and was constantly traveling. Not a great time to get a pet. When I moved to Portland we moved into an apartment building where many people had pets, not realizing they were all under a legacy policy and people signing new leases could not have pets. So another couple years animal-less. Then in April of 2017, we purchased a farm.

Critters I missed you!

The first animals we got were goats. There was the reasoning behind this, I had reserved a Maremma puppy (Ada) who would become our first livestock guardian dog. Ada would need to have some of the creatures she would grow up to guard already here so she would bond with them.  So home came Lacey, Taffy and Buttons.

After a puppy and goats, we got quite a few animals over the next few months. To outsiders, it probably looked like a heavy stream of animals, but I had an idea of what I was looking to do our first year. Also, I made sure to get into a routine with a new animal before getting another. A couple years I spent working on a horse farm was invaluable in learning how to set-up routines for animals.

Next up were chickens and then I unexpectedly rescued a kitten. A couple weeks later I managed to also get her two brothers. All three were dumped with their mother (months later I even was able to get the mother).

After that, we ended up getting pigs. So maybe I didn’t have a plan for everything. The person we had gotten the goats from had some “extra” pigs. This sort of thing seems to happen once you get into livestock, sometimes you get discounts for multiple animals or species. So when I was picking up the pigs I saw a cow and later ended up getting her too. 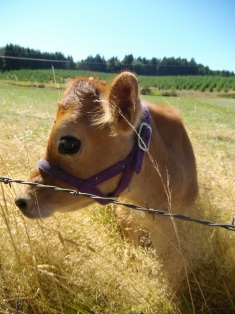 Getting the pigs did bring up the question of “would we eat the pigs”. All the other animals we had so far were either egg laying or for dairy. To be honest, I’m not sure I am going to be able to eat animals I’ve raised, but it is one of the questions I wanted to answer in moving to a farm. I might end up a vegetarian with pet pigs, I’m not sure yet.

The last new species we got in 2017 were ducks. Since then we got one more goat, another pig and another dog. With another animal of a species you already have there is certainly settling in as well. It can sometimes be more difficult than adding a new species. For example, the next pig was much younger and Petunia our dominate pig kept trying to beat him up.

That’s it for new animals for us for a while. You have to feed more in the winter so it wouldn’t make sense for us to do anything until spring. We also now have creatures for eggs and milk which was the main goal originally.

The next animal adventure I’m looking forward to is babies. We are planning on having baby goats in late spring, which I’m pretty excited about.